So i have to admit i am amazed and all in Awe taken by wolfy new outfits ! Cellar Door Adara & ! Cellar Door Adyna both outfits the same only dark and light 😀 When wolfy sent me the pictures i fell for the outfit hook line and sinker! it was so me!! so much so i had my profile picture wearing the outfit! All that is left to say is BRAVO miss Nitestar Albion

Again both outfit can be brought for a small amount of 100L!! for style like this you can not go wrong –

Right so as you may or may not know i started my own group called Vindictus Mercs and i thought hmmm you know we do have some real sexy ladies in our group with some smexy styles of there own! so my first lady is RAIN!! lets take a look at her in her rawrness

HOW RAWR IS SHE?? lets see what she is wearing

Thats right! Lark (discovering.destiny) owner of *On A Lark* has got the lola fever and i must say im happy she has!…so this craze i wasn’t too impressed as well there are prim boobs but now i know what men must feel like cos you can do alot with them! laughs ok so lets look at the outfit

So yes i gots the lolas!! and i must say the outfit is stunning, it comes with a simple applier that with one click it changes the texture ITS THAT SIMPLE then you have cute perky puppies. This was OAL offer for 25L this week but still worth buying full price ❤ comes in 8 different colours

Ok so this post and outfit have to give a big ty to Zandra Solo for showing me where to get this amazing dress! lets look at the outfit

Details of this outfit

Ok so very very far behind with posts as well i have been to new york and got back a while a go but just getting back into the UK time zones ect, sooo with saying that here is one of the newer outfits from cellar door!! i love all of these outfits as wolfy always puts alot of thought into these and it is always based on some folklore tale always adding some info regards to what hair fits well with it too. so lets have a look at this outfit

So this outfit i decided to put on my Mamba alt as it seemed very mamberish? if that is even a word laughs. I have to say i love this outfit you can wear it either as a free woman or a slave either way it will give your avatar a savage scary sexy look ❤ – https://marketplace.secondlife.com/p/Cellar-Door-The-Seer/4515867

Ok so being so close to Valentines day Lark has decided to make this incredibly cute dress along with headband and pin perfect for the cuteness which is valentines day Available in 4 colors and for 25L today so tp over and check out the rest of her range, i promise you will not be disappointed

Lark as always has made the best outfit for this occasion and i for one LOVE it! ahhh Love is indeed in the air ❤

That is right she has done it again! ωolƒу DaraKaruSilverfall (nitestar.albion) owner of Cellar door has made this fantastic creepy bad ass outfit! ! Cellar Door Macha! so here is a lil info behind the outfit and how it was inspired to all its beauty! Birds have been linked with death. Carrion-eating birds such as vultures, crows, and ravens, for example, were connected with disaster and war. Celtic* and Irish war goddesses often appeared in the form of crows and ravens—perhaps because crows and ravens were known to gather over battlefields and to feast on the flesh of fallen warriors. It was said that if one of these goddesses appeared before an army going into battle, the army would be defeated.

Macha (pronounced MOCK-uh) is the Irish goddess of war. Along with her sisters Badband Anu, she forms the triple Goddess known as the Morrigan. All three could take the form of crows or ravens, and would fly over battlefields, choosing who would die and who would live. They would then take the souls of the deceased in their black wings, flying them off to the Otherworld.

So in conclusion why do all the men have to have all the fun 😛 https://marketplace.secondlife.com/p/Cellar-Door-Macha/4484425 and yes its at her super low low price of 100L

I actually have been shopping around sl with the help of miss Prissy! – http://prissyblogs.wordpress.com/ here go check her blog out ❤

I am in love! yes indeed i am….who you ask? -ωolƒу DaraKaruSilverfall (nitestar.albion) owner of Cellar door, Her clothes are amazing! so well made and low price you would be silly to overlook her outfits! Her new outfit – ! Cellar Door Espen as seen below

This outfit wolfy has outdone herself! its kick ass beautiful! things that are not included in those outfit are the scarf and crest and cig but comes with EVERYTHING ELSE boots corset arm warmers shoulder armor shirt and pants! now i know the price may shock you a bit and its a bit much but…oh who am i kidding its only 100L IS THAT IT??? what are you still doing here hmm go buy the outfit! hell ill even make it easy for you – https://marketplace.secondlife.com/p/Cellar-Door-Espen/4468274      click add to cart ITS THAT SIMPLE ❤ you all 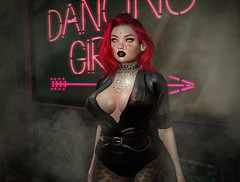 Second Life Rotten To The Core...

A Second Life Event catering to Horror, Goth, & the Macabre

Happily, Ever Afterr in Second Life
Hastags and Hashbrowns

Second Life and my Avi